And with cold weather come the comfort foods known as soups and stews.

If you visit en.wikipedia.org and look up the definition of “stew” this is what you will find:

A stew is a common food made of vegetables and meat in some sort of broth or sauce. The line between stew and soup is a fine one, but generally a stew's ingredients are cut in larger pieces, and a stew is more likely to be eaten as a main course than as a starter. But there are many exceptions - an oyster stew is more like a soup, for example. Stewing has a long tradition in cookery.

Soup is a savoury liquid food that is made by boiling ingredients, such as meat, vegetables and beans in stock or hot water, until the flavor is extracted, forming a broth...

Over the centuries, the terms gruel— a thin porridge— and potage have become separated from broth, and stock and their refinement, consommé, have all been used to describe this pot-boiling cooking method. The terms have shifted over time, but the modern definition of soup and stew were established in the eighteenth century. Soups usually are more liquid, while stews are thicker; contain more solid ingredients. Stews are cooked in covered containers for longer periods of time, at a gentle boil with less water and at a lower heat.

Traditionally, soup is classified into two broad groups: clear soups and thick soups. The established French classification of clear soups are bouillon and consommé. Thick soups are classified depending upon the type of thickening agent used...

Bottom line: each method cooks solids in liquid and then both the solids and liquid are eaten.

These ways of preparing food have a decided advantage for those among you interested in consuming fewer Calories.

The liquid in them, almost always water, helps fill you up, obviating the need to consume more calorie-containing substances for satiation.

There is no need to present any specific recipes here, only direction.

When it comes to soups and stews, go directly to the crock pot, do not pass “Go,” do not collect $200. Follow the directions for cooking in the slow cooker that appear in the “Kitchen Basics-Cooking” chapter in The FitnessMed (tm) Guide To Healthy Eating and that is all.

As a rule of thumb, add approximately 50% more water for soup than you would for making a stew.
Posted by Michael Applebaum, MD, JD, FCLM at Sunday, October 31, 2010 No comments:

The three food textures at The Gourmet-O-Matic tm are:

To add crunch to a food, try the following:

To add chewiness to a food, try the following:

As a group, legumes offer a crunchy resistance when first bitten and then add chewiness.

To add crunch and chewiness to a food, try the following:

Creamy dressings and relishes are made by adding and then blending or stirring: 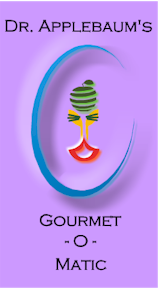